skip to main | skip to sidebar

At home with coffee

Test of netbook blog entry.  I'm trying to do my blog entries in pretty much the fashion I'll do them on the road during the Big Year just to see what hitches there might be.  So far, none, except that my Sony uses CF cards and my netbook doesn't have a CF card slot.  So I'll have to get a card reader that uses one of the USB ports.  The Panasonic uses SD cards for which there is a slot on the netbook.

Posted by Robert Ake at 9:32 AM No comments:

Merlin at Back Bay 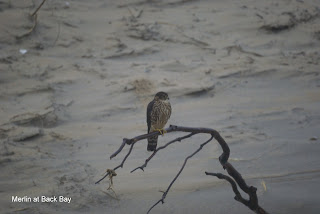 As part of our beach survey Sarah and I had just reached the North Carolina line having driven south on the beach from the refuge when Sarah pointed out a bird on a piece of driftwood. It was a Merlin and more to the point I was able to get in position, roll the window down, steady the camera, and take a series of photos in very poor light. This image was captured at 1/60 sec, so it's not as crisp as one might hope. However, I'm happy to have it. There wasn't much on the beach in the way of birds. The damage to the dunes from Ida was noteworthy with the primary dunes being breached in several places in both False Cape State Park and Back Bay NWR. Offshore many Northern Gannets were actively feeding as were many porpoises who included full jumps out of the water as part of their activity. Both Common and Red-throated Loons were seen, a few scoters of all three species, and some Red-breasted Mergansers.

Today during an impoundment survey at Back Bay NWR Geralyn Morales and I saw a coyote.  It was just standing in some water at the far edge of H pool.  It didn't move at first, giving us great looks at him.  Then he simply walked off toward the east into the shrub/scrub.  It was the first coyote I've ever seen in the East.  The photo here is not of the individual we saw.  Ours was indeed a very healthy looking individual, with very handsome fur with reddish tinges. He didn't look the least bit scrawny or mangy as so many coyotes look.  He was a handsome brute.
Posted by Robert Ake at 3:24 PM No comments: 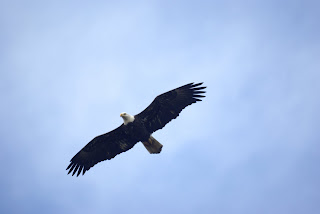 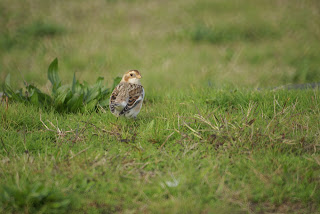 On Saturday, November 21, I spent most of the day at the hawkwatch platform at Kiptopeke State Park on Virginia's Eastern Shore.  It was a sunny day with a total of 80 raptors seen.  About 70 species including several Bald Eagles and the obliging Snow Bunting were seen or heard during the day.  The Snow Bunting was in the grass near the boat launch at the pier.
Posted by Robert Ake at 3:13 PM No comments:

Ahead of the storm 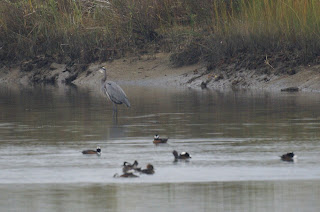 Just ahead of Ida that blew through here last week I took a picture of this Great Blue Heron with some Hooded Mergansers in the foreground.  For one thing it shows the limited depth of field of the 500 mirror lens.  But it's kind of an interesting image

Posted by Robert Ake at 2:57 PM No comments:

Photos in the dark 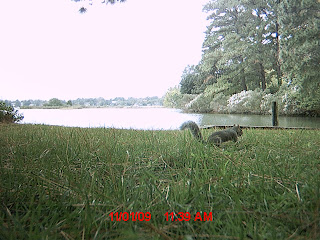 For the past several nights I've been trying to catch a photo of the animal that's been making a path in the grass from the water to a tree in my yard.  I'm using one of those cameras that hunters use to get an idea of what's around their blind.  So far I haven't been very successful in getting a shot of what I expect is a muskrat.  Instead I've captured several images of raccoons during the night and squirrels during the day.  But I'll keep trying and report back. 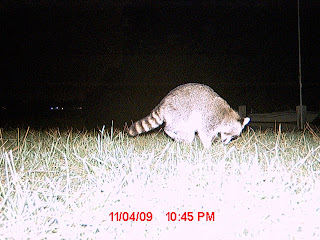 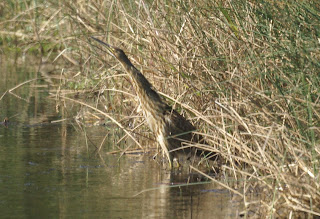 Did an impoundment and a beach survey yesterday, a combination I refer to as a double-banger. Highlights of the morning survey were a large number of American Coots, Ruddy Ducks, and Lesser Scaup over some sub-aquatic vegetation (SAV) in the bay. The first Tundra Swans of the fall were in B pool, while the Greater Yellowlegs and Dunlin which were in C pool during the last survey were still there. They were joined by a few dowitchers. A young Bald Eagle landed in C storage and appeared to be ill. The last bird of the morning was a cooperative American Bittern pretending to be a stick protruding from the marsh. 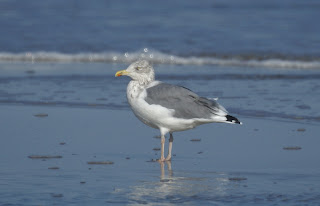 The beach survey was rather quiet with only a few gannets and scoters. An odd gull, probably a hybrid of Lesser Black-back and Herring, was studied and photographed.
Posted by Robert Ake at 2:56 PM No comments:

Blue-winged Teal in the cove

This morning I noticed a small duck following a pair of Mallards around. The light was terrible, but it was clear the duck was one of the teals. The scope helped me decide it was a female Blue-winged Teal. The bill wasn't small enough for it to be a Green-winged Teal and there was no indication of any yellow patch near the bird's tail. After a time, she took off and the blue patches in the wing were obvious. She remained through the morning. Too dark for any meaningful picture of her. She was year yardbird #125.
Posted by Robert Ake at 6:27 PM No comments:

Robert Ake
Last year I traveled around the US trying to record as many species of birds as I could. Last year's entries to this blog are the record of that adventure.